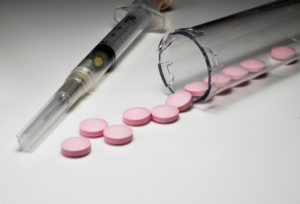 Fentanyl addiction rates are rising to epidemic proportions in America. It’s one of the deadliest drugs available, and overdoses caused by fentanyl abuse rose 540% from 2013 to 2016. Fentanyl is not only found on the black market. It’s also a prescription opioid used to treat moderate to severe pain. The drug was first synthesized in the 1960s, and quickly became a hit in America in the 1990s. Unfortunately, due to the accessibility of this drug, it’s also often added as a cutting agent to other illicit substances, like cocaine.

The effects of fentanyl use can be quite overbearing. If you’re addicted to fentanyl, seek fentanyl addiction treatment as soon as possible. After all, this is a very dangerous drug. The Drug Enforcement Agency has it labeled as a Schedule II Controlled Substance. It’s easy to develop fentanyl dependence and tolerance; however, abuse can be deadly.

Depending on the reason for the prescription, fentanyl can come in various forms. Drug abusers can find this drug in a powder form or in a tablet form. There’s also a fentanyl patch. There are also various administration methods. Each method will offer a similar high.

If you’re a fentanyl addict, you’ll need to look for professional help from drug rehab treatment centers. Addiction treatment can help you wean off of this drug and get clean. Understanding fentanyl rehab programs will help you navigate and return back to the community as a contributing member of society. It’s critical on your road to recovery.

Fentanyl and Its Analogues

Fentanyl is the strongest opioid available for medical use in people. It is 100 times more potent than morphine. There are also several other analogues that have a medical use among humans. The three most popular fentanyl analogues include sufentanil, alfentanil and remifentanil. All of these prescription drugs have a short onset and duration of action.

Carfentanil is also another popular fentanyl analogue. This drug is 10,000 times more potent than morphine, and is only approved for veterinary use on large animals. This drug is not intended for human use at all. As a result, it is not only of the most commonly abused forms of fentanyl.

Side Effects of Fentanyl Abuse

Due to the potency of fentanyl, misuse and abuse can result in some harsh side effects. Most of these side effects tend to be quite intense. They’re rather easy to spot. Common side effects and signs of fentanyl abuse include:

Upon taking fentanyl and fentanyl analogues, drug abusers tend to experience intense euphoric sensations. Some even describe the feeling as “feeling invisible”. When coming down, the effects then make a turn for the worst. Drug abusers may experience depression, nausea and severe fatigue.

The longer the fentanyl use, the more intense the side effects become. This is basically the same for any type of drug abuse or substance abuse. Fentanyl addiction treatment can help lessen the intensity of these side effects. There are various treatment options and treatment programs available.

The psychological symptoms are often the most difficult to overcome. They can be detrimental to one’s mental health. The prescription drug addiction treatment plan will include behavioral therapies. These are necessary in helping patients build better habits for a healthier life. 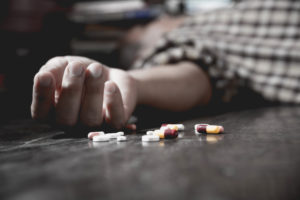 Fentanyl overdoses are incredibly deadly. The worst part is that just a small amount of fentanyl can lead to an overdose. Studies show that a lethal dose of fentanyl is about 2mg for first-time users. This opioid easily passes through the blood-brain barrier and attaches to opioid receptors in the brain. Knowing what overdose symptoms to look for can be life-saving. The idea is to get help as quickly as possible. Tell-tale warning signs of a fentanyl overdose include:

In most cases, a drug abuser overdosing on fentanyl will look like they’re falling asleep. Once they lose consciousness, they may experience both cardiac and respiratory failure or depression. Within minutes, they may stop breathing. If they don’t start breathing again soon, the overdose can become fatal. Risk of overdose increases with drug dosage. Other risk factors also include one’s biological makeup, as well as the length of fentanyl abuse.

Since cardiac and respiratory depression or failure comes with an overdose, it’s not unusual for an overdose to cause significantly damage to the body and brain. Those who are witnessing an overdose should call 9-1-1 as soon as possible. If they act quickly, they may be able to save a life.

How to Handle a Fentanyl Overdose

64,000 Americans overdosed on fentanyl in 2016.  Many people who overdose from fentanyl might not even realize that they’ve taken the drug. Fentanyl is a common cutting agent added as a buffer to many other illicit substances.

If the affected individual gets help in time, they can survive an overdose. However, they may still sustain a significant amount of brain damage. It’s vital that the opioid addiction gets treated as soon as possible.

Since fentanyl is an opioid, the most recommended treatment option is Opiate Replacement Therapy (ORT). This therapy involves substituting fentanyl with a weaker opioid. The weaker opioids will keep fentanyl withdrawal symptoms at bay, while still satisfying the body’s need for stimulation. There are many different types of prescription medications available. Different options are offered at each fentanyl abuse treatment center. The type of addiction treatment program that’s recommended will depend on a variety of factors, like whether the drug addict is struggling with a co-occurring disorder. Some of the most common options used in fentanyl abuse treatment include:

Methadone is a full opioid agonist. This means that it works in a similar way to stronger opioids, like fentanyl. It attaches to the same opioid receptors and activates the same chemical cascades. Because of methadone’s mechanism of action, it has a potential to be addictive. Patients at the residential detox must slowly wean off of methadone treatments. If they don’t, it’s possible to develop a secondary addiction to the medication.

Methadone is highly recommended for residential treatment. This is because it requires an extensive amount of supervision from medical professionals. This medication needs to be paired with behavioral treatment therapies for optimal efficacy. Although it can be addictive, it is a very effective drug for treating the physical effects of fentanyl abuse.

Suboxone contains both buprenorphine and naloxone. This treatment option is considered to be quite safe and has a low addictive potential because the drugs have a “ceiling effect”. This means that the effects of Suboxone are capped at a certain dosage. Even if patients take a larger dosage, they don’t feel a more intense high. This prevents patients from developing a physical dependence. It puts a stop to the addictive behaviors.

Just like methadone, Suboxone comes in the form of a pill or tablet. Patients with an addiction to fentanyl are prescribed varying doses depending on their situation.

Vivitrol is also known as naltrexone. It’s an opioid antagonist that blocks opioids from attaching to receptors in the central nervous system. This medication comes in the form of an injection, and is injected intramuscularly to the buttocks. Unlike Suboxone or Methadone, Vivitrol is injected once a month at inpatient rehab centers. Each patient is given the same dose at the treatment facility regardless of the intensity of their symptoms.

Unlike Suboxone and methadone, Vivitrol is non-addictive. Patients do not get addicted to this medication, and do not need to be tapered off of it. 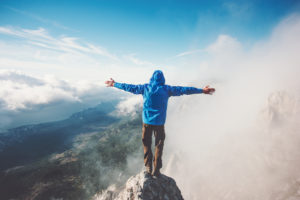 If you’re struggling with a fentanyl addiction, seek drug addiction treatment as soon as possible. A residential treatment facility, like ours, can do wonders for your recovery. We provide a safe and comfortable environment, along with the medical help you need. Our medical staff will assess your situation and recommend various drug rehab approaches that can help you get clean. We can also point you towards additional resources, like Dialectical Behavior Therapy (DBT).

Fentanyl addiction is an incredibly prescription painkiller. It’s one of the easiest synthetic opioids to overdose on, and one of the most commonly abused drugs in America. Fentanyl detox will often require around-the-clock medical supervision. Because of this reason, you definitely don’t want to wait to get the help you need. Speak to an addiction specialist at a recovery center that specializes in opioid use disorders. Rehabilitation programs can effectively treat fentanyl abuse.