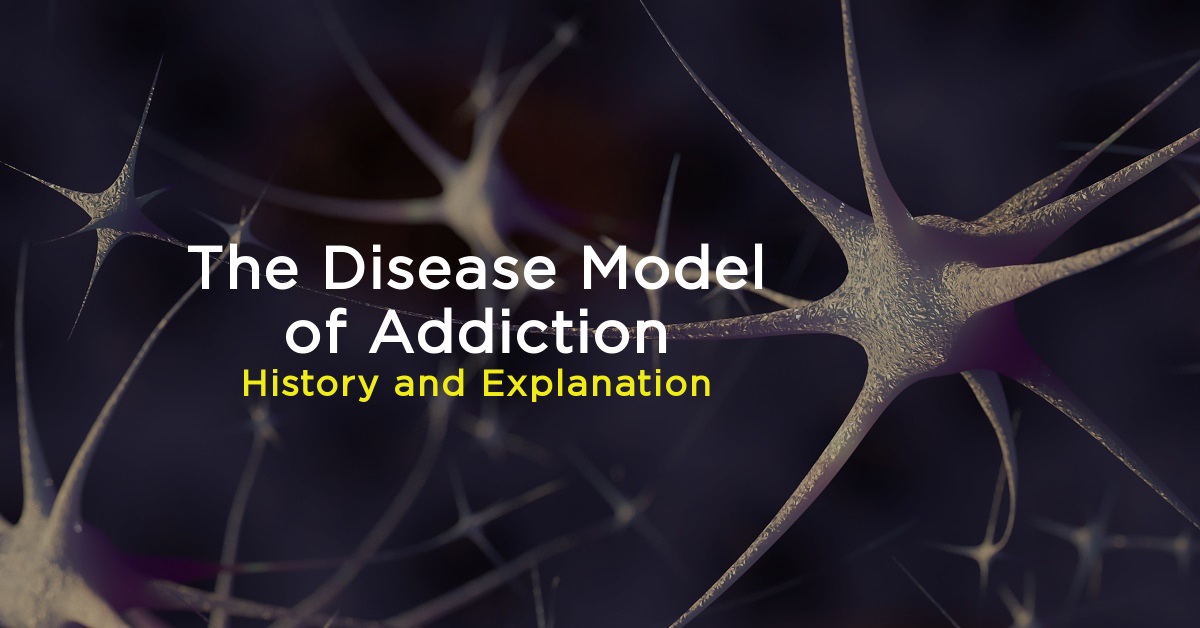 When we hear the word “disease,” many examples may instantly run through our heads. We primarily think of terminal illnesses such as cancer, or infectious diseases such as HIV. Most people, however, are not as likely to think of alcoholism or addiction. Yet the disease model of addiction suggests that substance use disorder most certainly warrants such a classification.

Some believe the disease model of addiction arose in recent decades as a ploy to eliminate the associated stigma of. However, the disease model actually finds its roots in the 1849 essay Alcoholismus Chronicus by Swedish physician Magnus Huss. In this essay, Huss described the defining characteristics of alcoholism—a term that did not exist prior to his use of it—as remarkably disease-like in nature. Marked by systematic physical damage, this chronic disease often proves fatal. And much like cancer and some other fatal diseases, alcoholism and addiction sometimes go into a period of “remission” only to resurface later in the form of relapse.

Despite these shared characteristics, many still take issue with use of the word “disease.” Some believe it diminishes the struggles of those suffering from more tangible illnesses. Others feel that it frees substance users from a sense of responsibility. However, the disease model of addiction warrants greater understanding. Whether you struggle with substance abuse yourself, or simply seek a better understanding of an addicted loved one, you can benefit from learning more about how chronic substance abuse affects the body and mind.

Classifying Addiction as a Brain Disease

Long after Huss wrote about alcoholism, several studies on alcohol and drug addiction backed up many of his claims. We now know that substance abuse does, in fact, change our brain chemistry through a very systematic series of events. A strong influx of dopamine activates the brain’s pleasure circuits. This causes the user to feel increasingly intense urges to continue using. As for why this happens with drugs and alcohol, but not necessarily with natural pleasures, the National Institute on Drug Abuse (NIDA) explains that substances of abuse often release 2-10 times as much dopamine as normal behaviors such as food or sex.

The disease model of addiction treats chemical dependency as an illness that develops over time. As the dependent continues using, they experience an increase in tolerance. We often characterize tolerance in a model known as the Jellinek curve. This stems from biostatistician E.M. Jellinek’s work, The Disease Concept of Alcoholism, which breaks alcohol addiction into several stages. Psychological dependence begins in the alpha stage, while physical effects start manifesting in the beta stage. By the time one reaches the gamma stage, they experience increased symptoms of tolerance, which NIDA explains as follows:

“For the brain, the difference between normal rewards and drug rewards can be described as the difference between someone whispering into your ear and someone shouting into a microphone. Just as we turn down the volume on a radio that is too loud, the brain adjusts to the overwhelming surges in dopamine (and other neurotransmitters) by producing less dopamine or by reducing the number of receptors that can receive signals. As a result, dopamine’s impact on the reward circuit of the brain of someone who abuses drugs can become abnormally low, and that person’s ability to experience any pleasure is reduced.”

Following the increase of tolerance, alcoholics and addicts enter the delta stage, during which the user begins losing control entirely. At this point, one will likely not achieve abstinence without the benefits of outside help. Finally, we reach epsilon addiction, characterized by chronic binging.

Genetics sometimes play a role in the development of substance dependence, a fact incorporated into the disease model of addiction. Heritability is generally considered to constitute about 50% of an individual’s risk of developing addictive tendencies, although the substance in question plays a large part in this. A person is more likely to inherit an addiction to opiates than to alcohol; likewise, they are more likely to inherit an alcohol addiction than a methamphetamine addiction.

The disease model of addiction relies heavily on the role of genetics and the systematic alterations to our physiology. However, it does not fully discount the element of choice or environment. Allow us to address those now.

Even this initial choice sometimes stems from environmental factors that become ingrained into our concept of self over time. For instance, those in the military may turn to substance abuse to overcome co-occurring disorders such as PTSD. Those who suffer childhood trauma may self-medicate to escape the pain of their adverse experiences. This self-medication also plays a role in the case of those who suffer from various mood disorders such as anxiety or depression. While perhaps not directly responsible for addiction, they certainly pose an influence. The disease model of addiction comes into play for these people because they feel an overwhelming need to experience that surge of dopamine.

Physical ailments impact the disease model of addiction in a similar way. Some take opioids after receiving a prescription for chronic pain, or perhaps following a surgical procedure. Escapism plays no initial role in the process. Nevertheless, they still experience the same flood of dopamine and the same increase in tolerance. Despite a great difference in environmental factors, the onset of the disease remains fundamentally unchanged.

Facing Criticisms of the Disease Model

Despite the reasons of many medical professionals for adopting the disease model of addiction, criticisms still abound. Critics believe that the systematic effects on the body are simply not enough to embrace the definition of disease. They note the lack of certain pathological factors that characterize most diseases, or infectious cellular agents that would normally play a role in a disease’s spread throughout the body. Furthermore, while the body certainly degenerates as a result of chronic substance abuse, critics note that addiction itself does not qualify as a biologically degenerative ailment.

Unfortunately, we rarely see these criticisms take the form of a discussion. Articles and studies address the disease model of addiction, while opposing articles and studies offer choice as an academic counterblast. Were the experts to spend more time in discourse, the medical community might either embrace the disease model of addiction or discard it altogether. At the very least, they may reach a compromise by defining addiction as a chronic behavioral disorder, a definition with which few would disagree.

Regardless of whether we embrace or reject the disease model of addiction, substance use disorder remains an often debilitating psychological condition for which many require help. Typically considered part physical allergy and part mental obsession, those who struggle with alcohol or drug addiction rarely recover completely on their own. A primary benefit of the disease model of addiction is that it helps greatly in forming a consensus regarding the best forms of treatment, allowing us to better ensure a successful and effective entrance into recovery.

The Disease Model of Addiction in Treatment

Many treatment centers utilize the disease model of addiction. Its insights into the process through which addiction affects our bodies and minds prove highly beneficial. For instance, the physical effects of addiction inform the detox process. Note that, in Jellinek’s stages of alcoholism, the greatest increases in tolerance occur after substance abuse has already begun to impact the user’s body. By this time, the brain and body have undergone massive changes. The result is that quitting often leads to withdrawal symptoms. It is not enough to keep detox patients in a safe space and prevent them from using. They must also receive medical treatment to ease their withdrawal.

We also know due to the disease model that addiction develops and worsens over time. This influences our treatment approach. First, we get the client to a safe place where they can maintain abstinence, thereby halting progression of the disease. Our medical support staff will assess the client and provide any medications or other treatments required to treat whatever physical degeneration they might have suffered. With these elements in place, our clinical staff helps the client formulate an individualized treatment plan that will allow them to adjust their thinking and fight the urge to use.

The user’s thinking must be taken into account as well. According to NIDA:

“[Previous] findings, along with ongoing research, are helping to explain how drugs and alcohol affect brain processes associated with loss of control, compulsive drug taking, inflexible behavior, and negative emotional states associated with addiction. Understanding these processes has already resulted in several effective medicines, as well as new and promising medication targets to treat drug and alcohol addiction. The authors add that this process of discovery within a disease framework has also led to the development of promising brain stimulation treatments and behavioral interventions…”

Behavioral interventions play an especially prominent role in addiction treatment services. In early sobriety, the desire to use lingers strongly. Even without physical cravings, the user remembers the rush of that dopamine surge. They may obsess over thoughts of experiencing it once again. We therefore focus a great amount of effort on peer support and relapse prevention. The best recovery plan is one that allows the addict or alcoholic to pursue a fulfilling life. A life that will provide natural rewards once the previous source of dopamine is no longer available.

Amethyst Recovery Center offers behavioral interventions in numerous forms. These range from cognitive behavioral therapy and addiction education to faith-based programs and holistic care options. For more information on how we can help you to fight the disease of addiction, please contact us today. And if you still feel as if you don’t fully understand the disease model of addiction, don’t worry too much about it. As long as you’ve even begun to contemplate the nature of your illness, you’ve made great progress toward change. We can help you take care of the rest.